Yesterday I chatted about the cards in my Designer Paper series of article that I made with the You’re a Peach paper set. Today’s subject is the Bloom Where You’re Planted paper set and the cards I made with it. I’ll have two more of these articles that will take us up to the last days the Designer Papers are on Sale – August 2nd. 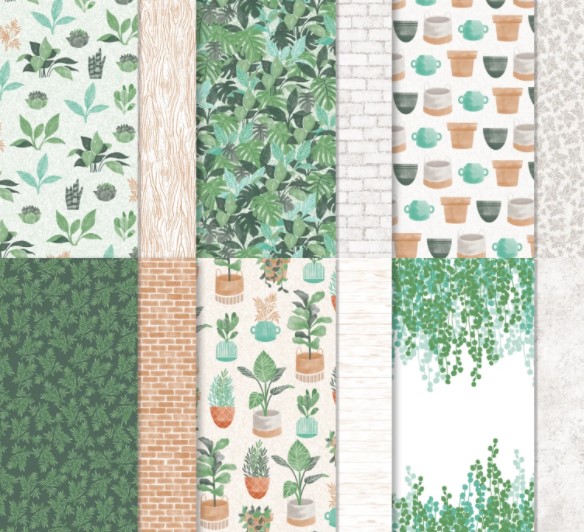 I can’t recall if I mentioned in an earlier post that this was not one of the sets of paper I bought when I first had access to all the Stampin’ Up! Designer Series Paper sets in the 2021-2022 Annual Catalog. But now I’ve definitely mentioned it. In fact, the only reason I bought this set was because I needed another set to finish this blog article series.

What? How could I have so ignored this delightful set of papers. For one thing I’ll buy another set just to get that wonderful brick wall pattern! And all of the patterns that go so well with it? And the papers that have such great fussy cutting opportunities? None of these papers is going to waste.

I keep thinking to myself sentences that begin with, “And not only that….” I’ll be sure to mention some of this today while I’m going over the individual cards.

To begin, here are the colors that are in this set:

The only color not heavily featured in this set of cards is Cajun Craze. I do believe that the reason is that it’s not heavily featured in the papers themselves. There are some shaded areas on some of the papers that look like Cajun Craze. But the bricks and some of the floral elements that have an orange-ish brown color are definitely Cinnamon Cider.

The  Card  With  Horizontal  Strips 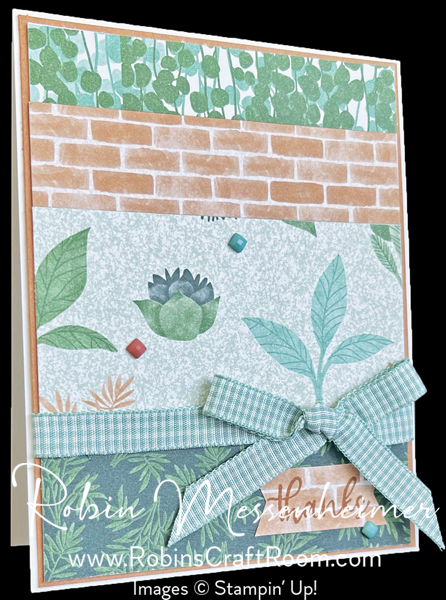 You may recall that the other cards made with the horizontal strip design had an additional element over to the left of the middle of the card. This was because the strips of paper were repetitive designs and none seemed to have a stamp-like design of its own. But this particular card has that large strip with lots of different elements. I didn’t think anything more was needed to complete the design.

It did need a mat for the strips layer, some ribbon, and a sentiment. Easy! I chose to accent the brick wall pattern (my favorite, did you guess?) with the matching Cinnamon Cider Cardstock. For the ribbon, I picked out the Just Jade leaf image and added the Just Jade gingham ribbon from the Flowers for Every Season Ribbon Combo Pack.

The final touch was the stamped “thanks” sentiment. I used Cinnamon Cider Ink and stamped directly onto a piece of the (what else) Brick Wall patterned paper. 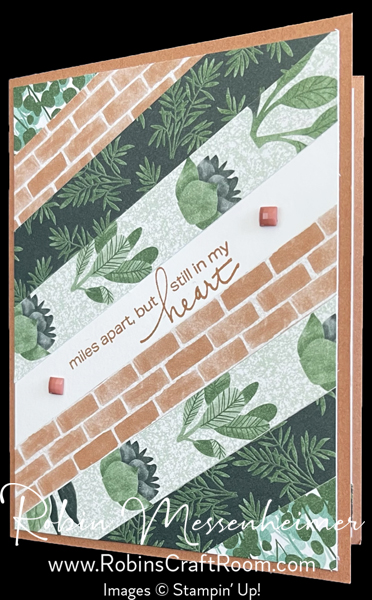 Here I’m just going to repeat what I wrote in the original post. It pretty much says it all.

It took me a while to figure out which pattern from the Bloom Where You’re Planted set I was going to use for  the main strip of paper – the one just above the sentiment. When I’m trying to figure out what in a set of papers will work with a particular size, I cut the shape I need into a piece of scrap paper. Then I move it around pieces of patterned paper to see if anything works. In this case, that strip from one of the sheets in this Designer Paper set popped out unexpectedly. I had to cut it carefully so that the main section of each image showed well.

I love the color combination in this set of papers, especially the Cinnamon Cider and Evening Evergreen combo. So I had to decide between these two colors to choose the color for my card base. As you can see, Cinnamon Cider won out. I followed through with that color to stamp the sentiment (from the Lovely You Stamp Set) and add the Cinnamon Cider square gem embellishments.

I can see that the brick wall pattern in this paper set is one I’ll be using a lot. When I was choosing which papers were going to be used for which card designs, the design with the three square elements popped right out.

Have you guessed that my two favorite colors in this set are Cinnamon Cider and Just Jade? So of course those are the colors I picked to feature with this set of papers in this design. The Just Jade cardstock mats all three of the squares as well as the brick wall layer. Then I brought it in again with the Just Jade Gingham Ribbon. Finally, I added the short sentiment onto the larger of the squares using Just Jade ink. Perfect complement to the card.

One of the main reasons I like this set of papers is all the fussy cutting opportunities it presents. For the center square, I cut out three different potted plants and moved them around until I spotted just the right layout. I love it!

It’s just a week from today that Stampin’ Up!’s Designer Series Paper Sale will end. Up until then, any time you order one of the sets in the sale, the sale price will come up on your order automatically. Why not try it? (Hint, hint.) 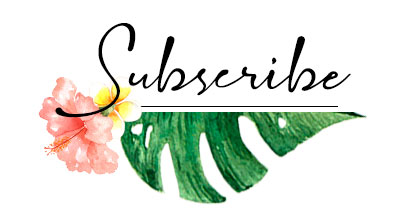